Tip 1 – Do not collect coins the whole time

Collecting coins is essential in this level, but it’s much better if you actually go in battle after a time period, especially when the witches spawn. It’s very likely that your troops will not be able to hold back witch attacks. A good time to switch from collecting coins -> attacking is when witches begin to spawn. You’d see a great improvement in performance.

Switching to attack after witch spawns:

Since there’s both melee, and ranged opponents in this level, it’s important to have a variety of troops. In our case, archers and soldiers. Archers are used against melee ogres, and soldiers for ranged troops. If you use only one of those, then there’s a big gap in the effectiveness. It’s likely that troops become outnumbered.
Archers only:

Abilities are pretty essential in this level. Especially the later levels. Try to utilize chain lightning, bash, cleave, etc. For example, you’d want to chain lightning the smaller ogres while bashing the stronger ogres, like witches. It’s important to use tactics in this level(Hence the name, Mixed Unit Tactics). Good luck!

Here’s a clip of me trying it out(You wouldn’t have peasants or paladins yet though. 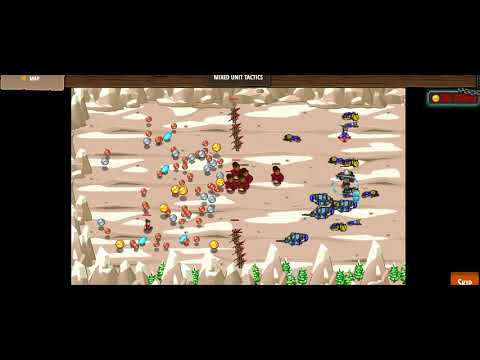 I really like those guides, @Chaboi_3000! I think that they are really helpful for the people who get stuck on the levels that you made guides for. Congratulations!