My hero dies and I need help. There are no errors, though, but my hero doesn’t attack? Its weird. Heres my code and a picture of my screen 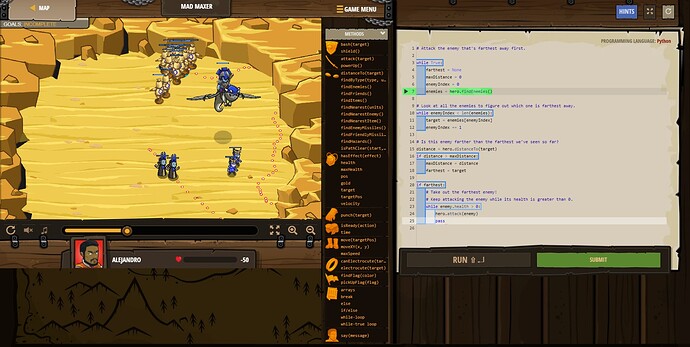 gonna try to indent everything into the while true now.

Ok my hero attacks but dies.

Your code is right if you put them in the right places.

You begin by checking for farthest, but then look for enemy. Keep in mind you need to stay with the same variable throughout, switching to a new variable that isn’t defined like enemy in this section will definitely prevent your code from running properly. Use the farthest variable you already have created instead of the enemy variable you are currently using in this section.

@AlwaysConfused what glasses did you use?

When i delete the nearest enemy i get an error saying there is no enemy.

Not exactly sure what you mean. My point was that you need to use the same variable that you defined and not create a new one.

You can’t check for enemy.health if you haven’t declared an variable called enemy with a value. You have created a variable called farthest and should check the health on that and attack it.

You can’t check for enemy.health if you haven’t declared an variable called enemy

So farthest is your enemy and you should use farthest to attack hero.attack(farthest)

why are you using while enemy when its if farthest?