You’ll also be introduced to a relatively unused method: findEnemyMissiles, I’ll also be making levels covering that method in the future!

Let me know if you see any problems.

I am unable to talk about the mechanichs of it but you may want to un-restrict the boss star. that was as far as i personally got because it is impossible to command friends without the boss star.

This is a fun level. Not sure why you restricted all the rings and required the skeleton ring…

Also, might want to include something in the instructions about having everyone stay behind the paladins. My archers were advancing beyond the paladins when I told them to just advance.

My hero also passed his paladin, but I had enough health to survive the fireball. Maybe make the fireballs hit harder on the hero?

I am unable to talk about the mechanichs of it but you may want to un-restrict the boss star.

There is restricted boss stars 1 and 2. You need the third (Boss star III) for this level.

It’s a fun level, please make more like this

I beat this level only with paladins:

Also, might want to include something in the instructions about having everyone stay behind the paladins.

I did this as well

I yell at the paladins to heal themselves

Ok. There is some comment. My hero have to walk behind the paladins, but if I use moveXY, my paladin can die. So there must be the comment that I need to use move() method.

You don’t need move. I just moved everybody with the same code:

First of all, thanks for creating a bit more advanced level

Second: I don’t know what was the original plan, but the level is successfully completed by simply moving the paladins in front of the statues (and shielding, of course): 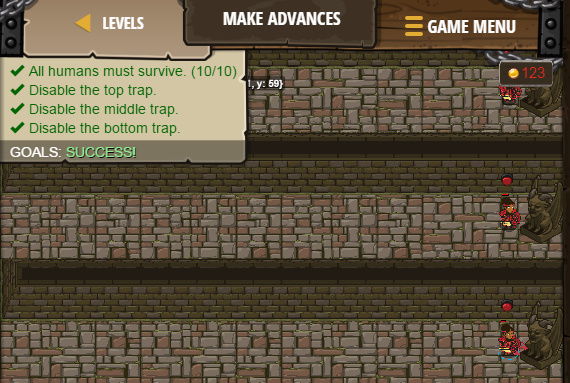 So there is absolutely no need to do anything with the archers or the hero, no healing necessary, so you could remove them from the level completely (well, not the hero)

update: I see someone else had the same remark already

Shielding is 100% the intended solution.

added LUA patch for the level

Got it, thanks again again Harry.

I can only reach the middle trap. On the bottom trap my paladin dies but the middle and top paladins survive. Do I need to heal them?

Don’t use moveXY to move the hero, instead use just ‘move’.

moveXY blocks the hero from acting while moving, while move only moves step by step, allowing the hero time to re-run the while-true.

Thanks its works now.

I noticed that there are wrong named Hints on this level which can be very missleading(It took me 4hours before i realized the Hints are wrong :D)

Some important things to note:
hero.findNearestMissiles() finds all missiles that they can see.

There is no available command as hero.findNearestMissiles()
I believe it should be that way:

Fixed the guide, thanks!