Harrowlands: up for a battle?

Now imagine if he used Ritic… blink to dodge, wall of darkness to block headhunter’s flying disk things, shadow vortex to get things out of the way, and phase-shift to move around. I bet he could get pretty far in Sarven Treasure with him.

Wait . . . how did Naria move from one side to the other side??
Lydia

The red X’s are teleporters that take you to the other side.

Oh, that explains it.
Lydia

Apparently Nick said that the times he went through the teleporters were coincidences(he didn’t code it so that he would go through them).

@nick just beat you with only Tharin.

All hope isn’t lost free-players! Again, I didn’t really have any complicated code(Only 33 lines), just used a lot of good timing at the beginning of the match. The performance(In terms of HP remaining) was much better with Okar however… 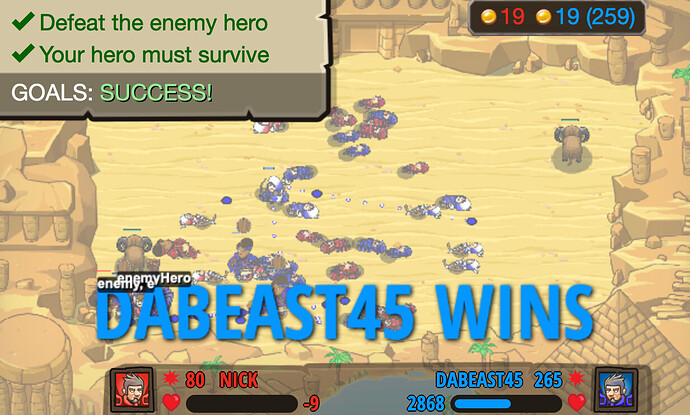 I took about 4 hours to write all of that code

sorry i have chronic amnesia (this is a joke), what wiki?

Nevermind, that was a joke about the joke) [Idea] Mage Items

So far when I try to beat Nick’s Red code, one random submission I lose, another I win, last one we tie.

Nick is super hard to beat with the scaled gloves because he immobilizes my hero so many times.

You could try ranged attacks?

I have tried that, but I do not have the gift of the trees or Ritic so I and dropped down some ranks so then switched to Okar and did better.

Use archers? Or any ranger? Or something with the throw/throwAt ability