Are decoys too annoying in multiplayer?

Talking about ranking we get a little offtopic)
As for decoys and @hmm3hero - what is his hero with error - knight or champion?

he is using Tharin(20)so knight I think

I had an error. He somehow bugged me. But when I changed my code, and I think I will win it said I have infinite loop.

The interesting thing is that once more people realize that using decoys is a good strategy, less people will use swords, which will result in the decoy strategy being less effective… It might even take away the point of swords in multiplayer.

I’ve also recently looked at DimaP’s strategy in Dueling grounds. He builds fences in the bottom right corner then summons decoys for the rest of the game. After the 10th second not one line of my code is run while I get killed by the skeletons.
Here’s a thought: why not only allow hammers for non-sub heroes? The combination of Nalfar’s summoning ability and the hammers fences and decoys is a bit OP, whereas it’s reasonably balanced with Tharin/Anya or the rest because they can’t summon skeletons or raise-dead. I think that’s one advantage that could be fairly given to the basic warriors.
Danny

I suggested only allowing it for warriors. I think we should allow all warriors to summon decoys, because I feel that without decoys there simply is no way for warriors(subscriber or not) to keep up with rangers or wizards. Also, less people might subscribe if they only can use decoys if they use non-subscribed warriors. Just my thoughts

What’s wrong with his strategy? Many people attack by bear-traps and make decoys, it’s almost the same. he made Mega archer, and people use many bear-traps.

@PeterPalov it’s because Dima is placing units outside the map, making it impossible for the enemy player to attack anything another than that decoy(Because decoys override targetting). Which technically can be considered an exploit.

Dima is placing units outside the map

No. He didn’t. His the last code submitting was 4 months ago and since that time his actions are on the arena. 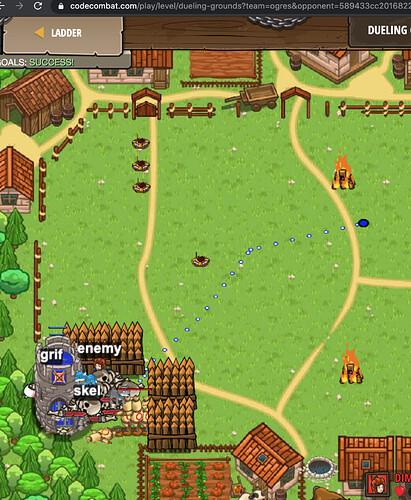 So that was another player? My bad. I think fences themselves are too troublesome in arenas. One guy trapped themselves in the corner and used Boom Ball to spam the ability without taking damage.

So that was another player? My bad.

There was a time Dima walked outside of arena, somewhere here was the screen and post) But after that he abandoned this idea.

I think it would theoretically be possible to summon a decoy at the lower-left corner, then once it goes out of bounds cast swap on it, but I’m not sure how that helps people win duels.

I just fixed the collision bounds on Dueling Grounds and implemented a huge nerf to Decoy health and lure range on Zero Sum.

This is great, very helpful thread. Can someone summarize the consensus on remaining multiplayer issues?

Existing and very annoying things I can point out:

I can add strange ghost player, but it looks like single case (at least I haven’t face other such cases)… https://codecombat.com/play/level/dueling-grounds?team=humans&opponent=59d51bc62eb8b30040aaca2a Some DB error I think, but can’t state for sure.

Maybe someone could add something i missed.

I don’t like decoys. It’s impossible to win against it. If you spawn it, your enemy will attack it no matter what. I personally think it’s too annoying and it should be banned.

What hero do you play?