The new arena “Frozen Fortress” is in action, so please report any bugs that you find or if you have some feedback here. If you want to ask advice how to code something, then please use other topic. Offtopic will be deleted.

Feedback:
In this arena it’s really easy to get a tie. It would be great if in such matches the winner would be the one who has got the most health.

I have noticed that the majority of the matches I lose are due to some kind of bug. Whenever I view them, it says that I win, even if I use the spectate option. Is this happening to anyone else?

Try using direct.codecombat.com, it should work (I had the same thing with losses).

Hey folks! I’ll be handling the feedback for Frozen Fortress.

Thanks for gathering things in this thread, I will investigate these things:

If you can identify a bug causes losses/wins, feel free to bring it up and I will investigate further.

The getTowerAtPlace() function doesn’t seem to work. It keeps giving me the error
“Cannot read properties of undefined (reading "toLowerCase")” when I plug in something for the tower’s letter.
For example,

Lots of changes landing today for everyone to experiment with.

Balance:
Shockwave now costs 1 mana for every 2 health on an enemy being forced back. This is a nerf. Some sessions between players were keeping too many enemies on the screen at once.

I think the creation of the 8-farm/shockwave-spam strategy was a neat discovery! But the arena is about defeating enemies, not holding them off forever. I apologize to everyone using this strategy.

Improvements
hero.time is now exposed for players to use.
tower.place now returns the location of the tower.
Victory conditions are tweaked so that: Highest health wins, then highest score (score is gained by summoning units through "summon" or "barracks").
hero.score is also exposed now.
With shockwave’s nerf, max-session length has been increased to 90 seconds to decrease ties.

can you make it so i can see my own health, enemy health, and enemy.pos and hero.DistanceTo() method

Enemy,pos exists and it works. You can find the distance between you and ogres using coordinates (enemy.pos.x) or Pythagorean theorem. Enemy health also works.

It would be really cool if it was possible to find enemy’s speed.

Pos will be removed as its not mirrored. We will add x and y.

Man the warlock’s suicide explosion is so powerful. Can completely change the tide of war.

Also sometimes at random it will do this 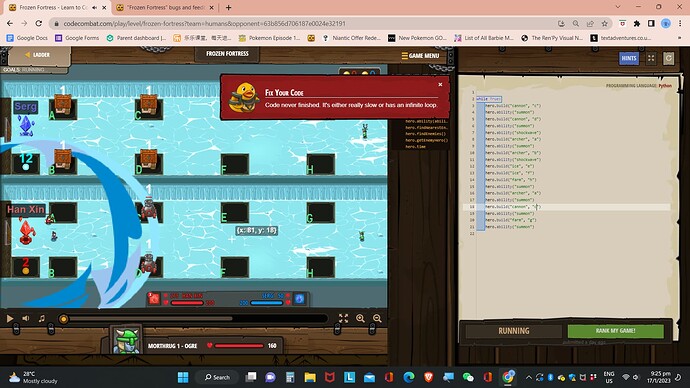